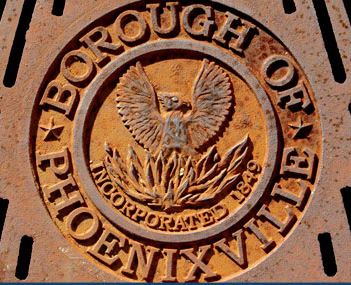 Manavon was settled in 1732 and incorporated as the Borough of Phoenixville in 1849. In its industrial heyday early in the twentieth century, it was an important manufacturing center. It was the site of great iron and steel mills such as the:

Like so many American towns and cities, Phoenixville owes its growth to its waterways. It is not only situated on the broad Schuylkill River, a historic thoroughfare to Native Americans and early settlers alike, but it is bisected by the fast-flowing French Creek, which was quickly harnessed for waterpower.

Phoenixville has the largest registered historic district in Chester County. Many homes have been maintained and improved. Many stores have retained their Victorian facades.

Special thanks to the Phoenixville Historical Society for this content.

The Historical Society of The Phoenixville A

Founded in 1977, the Historical Society of the Phoenixville Area promotes the rich heritage of the Phoenixville community and is a repository for artifacts, documents and photographs of that heritage. Located in the former Central Lutheran Church (1872) at Church and Main Streets in Phoenixville, the society operates a museum and research library. Among permanent exhibits are Native American artifacts, early maps and pictures of the area, boat models and other artifacts related to the Schuylkill Canal, Etruscan Majolica pottery made in Phoenixville in the late 19th Century, and an extensive exhibit tracing the growth of the iron and steel industry in Phoenixville.

The research library contains books, documents and photographs related to the history of people, places, organizations and businesses in the community. The Museum and Library are open to the public Wednesdays and Fridays, 9 a.m. to 3 p.m, the first Sunday of the month, 1 to 4 p.m, and also by appointment.